Skip to content
Well, I say dead. A great many American dentists still want it kept on a respirator just in case it shows a flicker of life – like when there’s a piece of Cajun chicken lodged between the most distant molars, or you need to make a video of your child’s tooth being pulled out by a homemade space rocket.
The fact is, the British dental profession gave floss a quiet burial years ago after sneaking it out the back and finishing it off humanely with a lump-hammer. Yes, in the UK we realised ages ago that – and if you still religiously floss daily, look away now – flossing simply doesn’t work as a health measure (or a fetish). 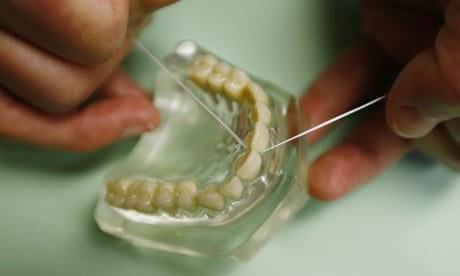 Everyone recommends flossing – but there’s hardly any proof it works

Dental organizations and the federal government have long urged people to use dental floss, but the latest US guidelines have dropped the recommendation
Read more

Let me say that again. FLOSS DOES NOT WORK. Not at all. There’s not a shred of evidence that it does any good whatsoever. I mean, it seemed a good idea at the time – 1882 to be precise – but modern evidence would demonstrate that it doesn’t improve gum health one jot (to use the scientific term).
The British Society of Periodontology, the organisation that specialises in gum health, has known about the black heart of floss for years and currently recommends the use of single-tufted interdental brushes for effective cleaning between the teeth. The American Dental Association and the American Academy of Periodontology however, are largely ignoring the fact that their government’s latest Dietary Guidelines for Americans has quietly dropped its recommendations for flossing because under the law, the guidelines must be based on scientific evidence.
The enthusiasm with which American dental professionals promote flossing despite the evidence, has raised the notion of a conspiracy with floss manufacturers. I don’t believe for a second that American dentists are in cahoots with floss makers, but why do they cling to the notion that floss is a good idea and keep recommending it? Perhaps because, like flossing, it’s a habit and after over a century of promoting the use of floss, it must be extremely difficult to backtrack and say: “Houston, we may have a problem.”
The Brits never had that dilemma. As a nation we were never great flossers anyway and now we know that our patients had an uncanny and instinctively accurate inkling that the lacklustre recommendations of their dentists and hygienists were best ignored.

The secret life of a dentist: some patients think superglue will fix their toothache

I can see why Americans like to promote floss. As a dentist I can appreciate that if flossing is done “properly”, the technique is precise, even elegant. If you have a regular flosser in the chair, you know the patient cares about their teeth, having dedicated a fair chunk of their day to a particularly tedious and often unpleasant task.
But even with the best technique, the evidence doesn’t support flossing as an adjunct to brushing. Most patients, even if they bother to get the minty-waxed out the box, are exceptionally heavy-handed and macerate their gums like they’ve been chewing on bare vacuum cleaner flex. Even in controlled studies, after instruction, the patients taking part couldn’t floss properly. I know of no dentist who flosses. Not one. And of the colleagues who don’t walk away bored witless when I have broached the subject of flossing, most admit that when they tried it, it was really difficult to do effectively, even with their assumed level of dexterity.
Nowadays in the UK, we (I hope, how I hope) all recommend single-tufted interdental brushes as an adjunct to regular brushing. The studies prove beyond doubt that they significantly reduce plaque deposits, decreasing gum inflammation and reducing the risk of gum disease and bone loss. They either have a conventional toothbrush handle or look a bit like a toilet brush on a stick, though it’s best not to think about lavatories while you are using them. The only time I reluctantly suggest floss is when a patient has an area so crowded, floss is the only way of getting between the teeth. And even then I cross my fingers.
Floss is dead. Long live the single-tufted interdental brush.

Now 70, I'm getting back into website development and brand protection, as well as showcasing the delightful artistic talents of my beautiful wife Lynne. My projection will encompass a lifetime of database marketing, as well as the Christian democratic socialist ideals of my wife and I. View more posts